Exit stage left: warm weather.  Enter, stage right: an age of winter coats, hats, mittens, scarves, museums and monuments and relearning how to use the metro, or whatever the heck they call it in D.C. We haven’t had to use subways since, well, I literally cannot remember the last time.  It has been nice having our own car, rental car, or other means of transport.  For our time in Washington D.C. we relied on the trains and almost immediately purchased a metro card.  We also walked a lot.  If it wasn’t so chilly in November we might have rented bicycles as well.

Callum loved D.C. almost more than anything else we saw this year, because of the Smithsonian museums which are all free and all next to each other.  We went to a total of ten museums each in four days.  This is a lot of museums for someone like me who doesn’t particularly like them.  However, I will admit that I thought the museums we saw were all wonderful and I encourage anyone to visit all or most of the ones listed here or as many as possible.  We went to: the Ford Theatre, the White House (not in it, but we walked by it and then went to the visitor’s centre), the National Archives (where there are important papers like the Declaration of Indepedence), and The National Air and Space Museum on the first day.  The second day we visited The United States Holocaust Memorial Museum and then went to the Newseum.  Our third day we had a tour at the United States Capitol and then visited the Library of Congress.  I didn’t expect to care about that last one.  It was one of the most beautiful buildings I’ve ever seen.  We returned to the Newseum to see what we had missed the day before.  In the late afternoon we walked to see the Washington Monument up close and then walked allll the way to the Lincoln Memorial and the Martin Luther King Jr. Memorial which are very far away for a girl with sore feet.  Our last full day I went to the National Gallery of Art on my own while Callum was at the National Museum of American History, then we met up and both went to the National Museum of Natural History.  It was a lot.

Our favourite was the same: The Newseum, which was fascinating.  It was a 7 floor museum all about the news and what has been news and how news is relayed and how it was relayed in the past.  It focuses on the freedom of speech and of course, freedom of the press as well as the other three freedoms from America’s First Amendment (religion, assembly and petition.) We spent a total of 6 hours there over the course of two separate visits on two different days.  That was the one and only museum we paid for and though the $25 entrance fee (per person) seems steep at first we felt it was worth it as well as all the time we spent there.  Not to mention their excellent cafeteria.  Our first day we went it was already past 3pm and museums typically close around 5pm.  I asked a worker at the info desk “What should we see; we have 2 hours and I feel overwhelmed just looking at the map of this place.”  She sassily blinked at me and said “Gurrrl, you betta see allovit.  You can do it! 20 minutes per floor, gurrl.”  So, we saw allovit.  Over two visits—your second visit is free if you still have proof of your ticket purchase.  Very cool! 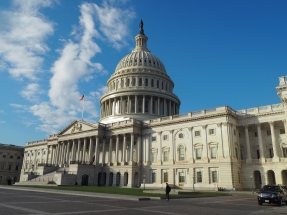 The Ford Theatre: Tower of books written about Lincoln 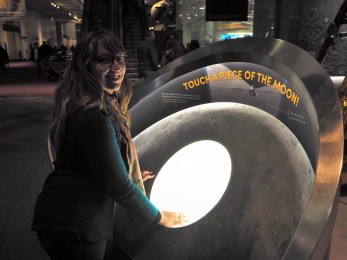 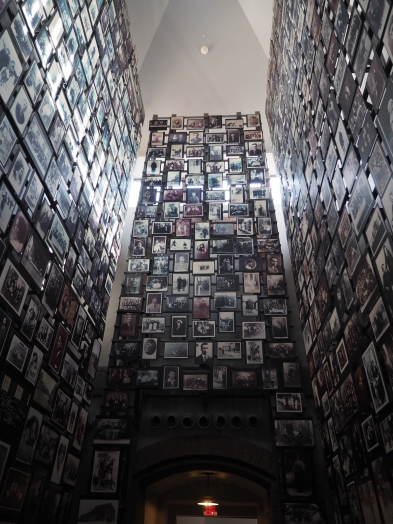 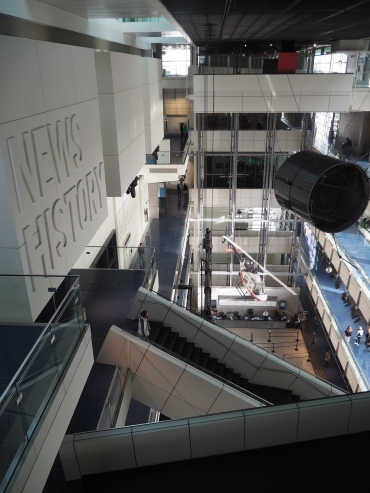 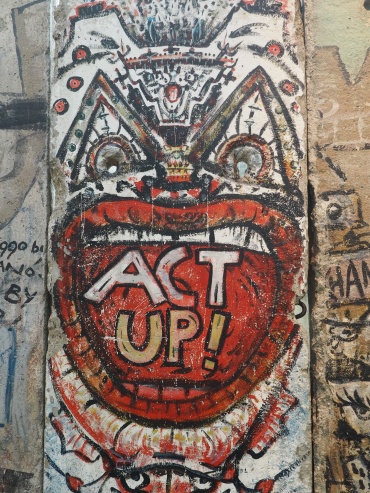 part of the Berlin Wall at the Newseum

Virtual reality experience at the Newseum

being a newscaster activity at the Newseum 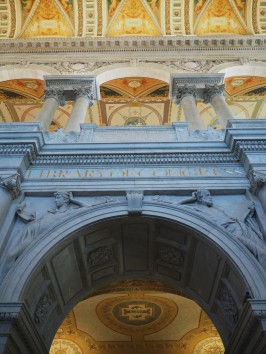 Me with the Gutenberg Bible 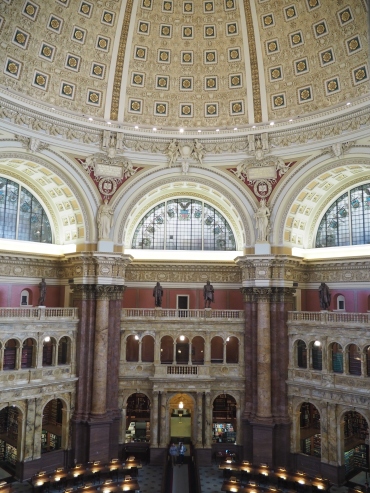 Thomas Jefferson’s library inside the Library of Congress

Me at the National Gallery with my pal Vincent

Butterfly pavilion in the Museum of Natural History 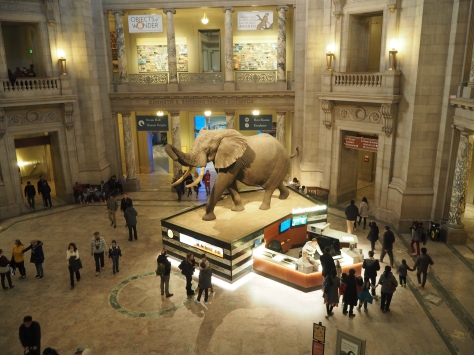 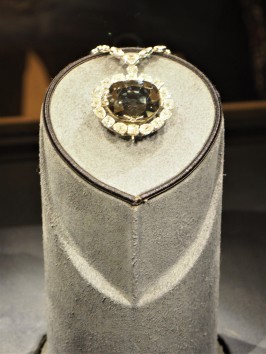 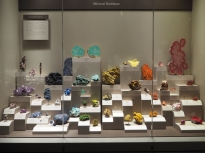 With his spirit animal at the Museum of Natural History

We realize that D.C. is more than just museums and monuments but that’s all we were really there to see.  As we walked the streets and encountered the people we learned how friendly it is.  Every single encounter with a service person was positive, the policemen and women were helpful and kind, and the general vibe was just really happy.  I have to say it.  Being a proud Canadian and all makes it a bit hard to admit, but, well….Americans are nice.  They are some of the nicest people ever.  Seriously.  Sure, Canadians are polite.  And so apologetic.  But Americans are much nicer.  I feel like I’ve said this before.  Have I?  Anyway.  This truth was evident everywhere we went in D.C. and I would happily return there to see a few more museums and things that we might have missed.

The first day we visited the Ford Theatre for a tour which Callum had booked for us.  The Ford Theatre is where President Lincoln was shot by the way.  Like duh, I’m sure you knew that.  I certainly did.  The morning of the tour I found out.  Lol.  I am not sure why Cal felt it was okay to book a 9am tour the very next morning after a very tiring travel day the day before, but, that’s what my husband does.  I was a little bit grumpy having to get up early, walk quickly to the metro in the freezing cold, and then stand in line in said freezing cold.  There were some folks just in light cardigans and there I was, rugged up in my winter coat, toque, mittens etc. and shivering.  One day a black woman (lots of sassy—but friendly—black people in D.C.) passed us on the street and Cal overheard her say “Dang, gurrrl, you need some sun.  It ain’t that cold!!!”   Waiting in line to get in to the Ford Theatre, there was a high school group all pshawing and rolling their eyes while their frazzled teachers tried to keep them all in line.  Ha!  Suckers.  Callum and I commented “glad these ones aren’t our responsibility.”  One (very white) male teacher was reprimanding one (black) girl, saying “Gurrrrl, you better get back in line.”  That’s the thing about D.C. They really talk like that!  In our first two hours of walking around the city, we heard “Gurrrrrl” three times, all by wildly different people.  Anyway.  We finally got into the theatre and were a bit overshadowed by the school group.  No one really told us where to look in the museum or where to meet up for the tour.  It turns out we just bought tickets for a presentation in the actual theatre room itself by a park ranger, as the theatre is now managed under the National Parks.  The information was very interesting.  I was most intrigued by the man Abraham Lincoln and felt sorry for him as I learned of his horrible fate.  The ranger described it as if Brad Pitt were to shoot the President today.  John Wilkes Booth was a very well-known good-looking actor.  While listening to the story I found myself hoping that Lincoln would pull through and make it out alive.  I of course knew this wasn’t the case, him being dead for over 150 years now and everything, but that’s how engaging the ranger was.  I was hoping for a different historical ending than what I knew to be true.  After the speech we were directed to go across the street to the Petersen house which was a boarding house in the 1865.  This is where they brought Lincoln after he was shot as he was still alive at the time.  He didn’t end up dying until the next morning.  It took 12 days for the authorities to find Booth and shoot him dead.

I won’t tell stories about every museum we went to, but it was fun to see the White House in real life.  As we came up to where it was in the city, I said to Cal “look, there’s the White House!”  He said “How do you know that’s it?”  I said, “I saw a map and knew that it is right in front of us.”  At an intersection there was a sign that pointed in the direction of the building we were standing in front of that said it was the White House.  I took a picture of Callum with it.  “It looks different in real life than in pictures,” commented Callum.  Then, we both realized what we were looking at was not the White House.   It was the Treasury Department, ha!  The White House is next to it.  Or for us, behind it.  We had a good laugh about that.  We as foreigners were not allowed to have a tour of it.  There are some pretty involved procedures even for Americans to be able to tour it.  We went to the visitor’s centre instead and that was good enough for me. 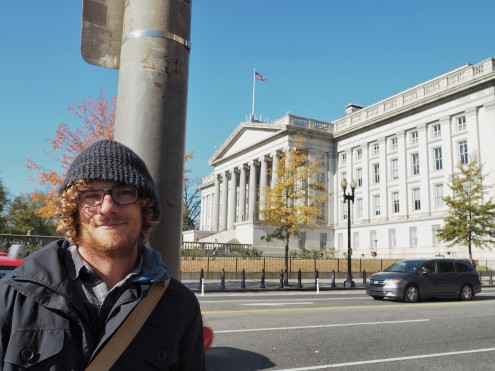 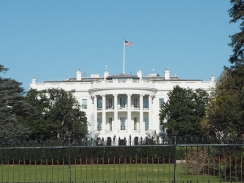 Now THIS is the White House 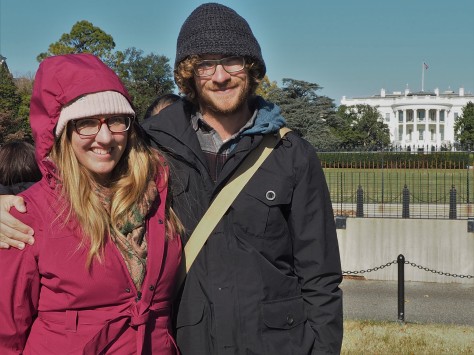 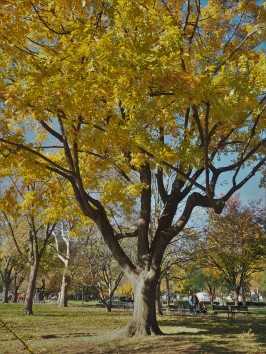 Interesting protesters near the White House 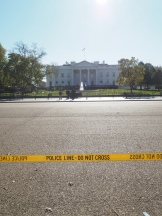 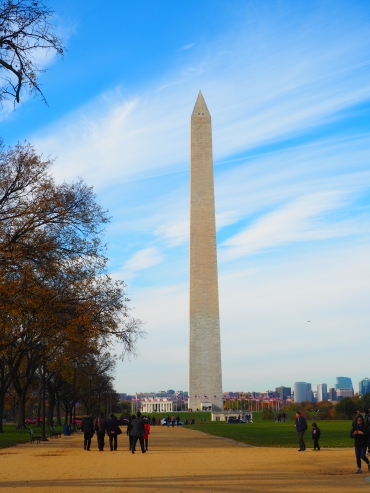 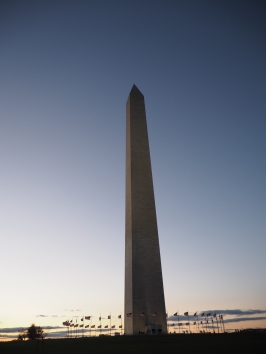 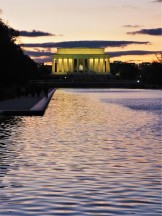 Look at this guy

Me very excited about my 2nd turkey dinner

We were lucky with weather while in D.C.  It never rained and could almost be described as unseasonably warm for the time of year.  (Yeah, right.)  It was sunny every day and the autumn colours were gorgeous.  I am so glad we got to go and spend a few days learning about a lot of various topics.  A great reminder about the necessity to keep learning for life.  Also, I got to enjoy Thanksgiving dinner for a second time this year!  America celebrates it at a different time than Canadians.  Hooray for turkey!