A brief trip to a tiny sliver of a pinky fingernail of the country that is India. Known as the Golden Triangle, we toured Delhi, Agra and Jaipur as a taste-tester for me, an India Beginner. It was a good amount of time and I look forward to visiting more of the country in the future. We were there in December, which offers cooler temperatures and was actually chilly enough for us to need a sweater in the mornings and evenings and never got so hot that we were uncomfortable.

Delhi shouted colour everywhere and was chaotic and dusty and smelly and what I imagined it would be, to be honest. I have been to third-world countries before so I wasn’t shocked by what I experienced, but what struck me the most was the juxtaposition of beauty and ugliness that can be found in Delhi. Every person I saw had either a rugged or startling beauty, but the garbage scattered through the streets, the muddy pools of stagnant water in random places, the goats and dogs and cows roaming the streets—though interesting, were at times off-putting. I am a person who likes to look at things while walking…my husband tells me that’s the reason I always walk into things or stub my toes. In Delhi, I really had to pay attention to where I walked, or else get trampled by donkey carts, motorbikes, or fall into grates, stub my toes on rubble, etc. I stopped a lot to take photos and then resumed my intense watching-where-I-walked. 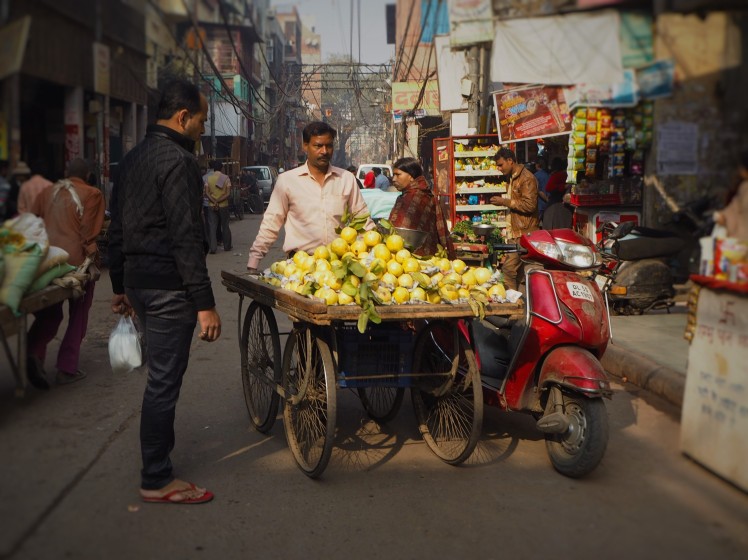 A highlight of Delhi was the Jama Masjid, a large mosque located in the centre of the city. This was the first time I noticed how symmetrical the architecture in India is. Though it is of course an Islamic building (duh) it seems that every building I noticed in India follows the rules of symmetry. There are three domes, two minarets and an enormous courtyard which can fit many hundreds of people. We sat by the square pool and watched as devout people came to wash their faces and feet. We got a lot of attention from local tourists who may see white people very rarely and I posed in several family photos. After being a bit overwhelmed by this, I covered my head with the borrowed robe and fewer people approached me. 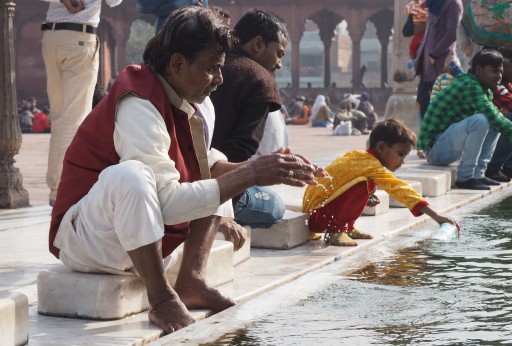 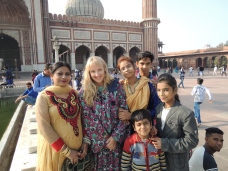 Me with one of many Indian families 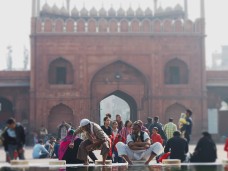 Agra is clean. Where we stayed in close proximity to the Taj Mahal, that is. I can’t really make comment on the whole entire city, but we were about 1.5 kms from East Gate and it was really clean. No garbage on the streets, everything maintained, easier to navigate the pavement—it seemed cleaner than Perth, even! You’d only really visit Agra to see the Taj Mahal and therefore only need two days or so. I highly recommend getting up early on the day you’re going to visit the world-famous mausoleum. Though the gates don’t officially open until 7am (the sun has already risen by then) and you have to endure the security process, it is worth it to be at the gates in line by quarter to 7. Then, make a beeline for the famous Princess Diana bench and get your photos done. Afterward, watch everyone else try to get the same famous photo while all the early-birds wander the grounds and get in the way of the photos. Our photo was taken early enough that we only had a few tourists in the background. We then spent a leisurely three hours walking around the gardens, taking our time around and in the building, and resting on the benches people watching.
I certainly can understand now why people term the Taj Mahal the most beautiful building in the world. It actually is! Part of what makes it so awe-inspiring is the material from which it is built (marble) and also largely due to the light which reflects off of it; so, lucky for the Taj. The time of day changes the way light looks, so the Taj always changes in hue and character. I liked it. It felt kind of poetic watching the gleaming light reflect and waft over the marble. 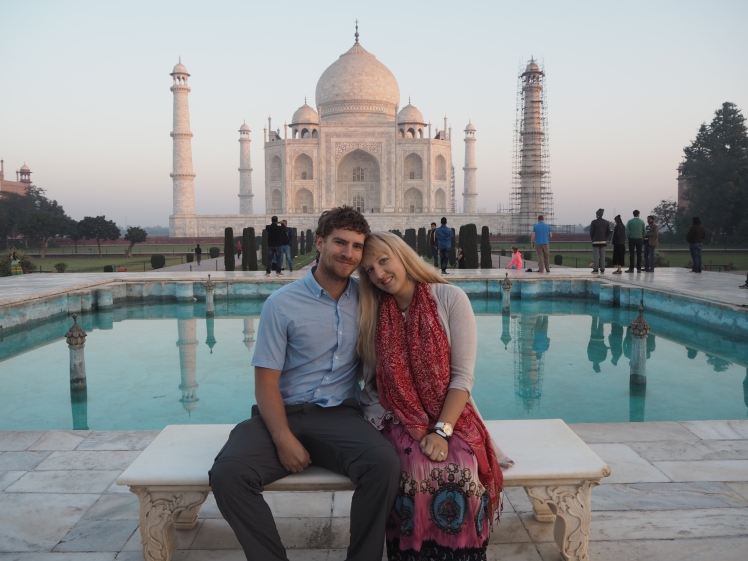 The Pink City was beautiful and full of people. When Callum told me we were going to a city where everything was pink, I have to admit I imagined some sort of bubble-gum Dr. Suess rainbow of different shades of pink. It wasn’t that, but it was still neat. It was more of a salmon sort of orangey pink colour and was only in the old city. The story is, some maharaja back in the day wanted to paint the city pink because he thought it was a welcoming colour. Specifically, it was painted pink to welcome the then Prince of Wales (Edward VII) in 1876. We visited the Hawa Mahal, (Palace of Winds) which is where the maharaja’s wives and concubines could view the street proceedings from behind the safety of the screened windows. We got to sit and also view the city below from the windows and were suitably entertained, understanding more why the ancient ladies would like to sit there. Being somebody with rather blonde hair in India meant that I got a lot of attention while on our trip. From the screened windows I was able to enjoy the scene without being part of it. 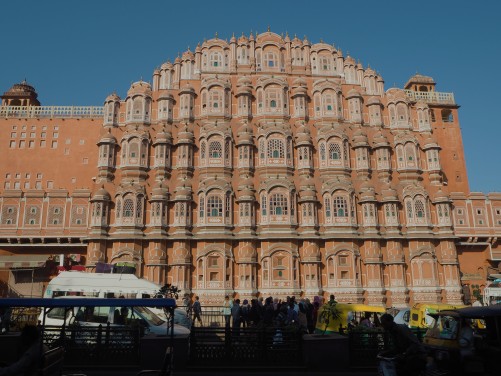 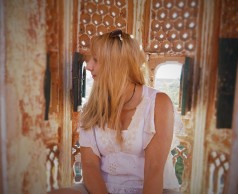 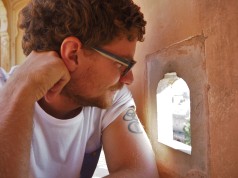 Jaipur is also a great place to do some serious shopping. The vendors and shop owners, however, are used to time-poor rich tourists with money to burn, so prices quoted won’t be as cheap as you can find elsewhere in the country. The trick is to make sure you have more than just a day in Jaipur (you’ll want it anyway) and to let everyone know that you’ve been there for a day or two already and have time to kill. I picked up some lovely pashminas and bags and also saree.

While in Jaipur we also made time to visit an elephant sanctuary called Elefantastic. It was such a good experience because we talked a lot with the owner Rahul, who used to be a mahout. He started to really hate witnessing the poor treatment of elephants that were used to transport giddy tourists up and down the hill at the Amer Fort. He rescued two dozen elephants and opened up a sanctuary where it is his aim to educate people about elephants while still giving them a unique encounter with these large and amazing creatures. We got to bond with “our” elephant for quite a while, petting her, making eye contact, feeding her and then painting her with safe paint. We then took some photos and walked her over to have a drink. We then washed off all the paint, scrubbing her nice and clean which she really seemed to enjoy. Finally, we got to ride her into the sunset, sitting on only a blanket rather than the wooden seats which can hurt the animal, and which Rahul does not use at his sanctuary. Google it and go do it. Just be careful of copycat companies.