Callum’s take: “Rainbow Mountain” or as it should be renamed, “the biggest tourist trap in Peru” is severely overrated.  I think this is in large part due to Instagram and Pinterest putting so many filters on “places of the world that you must see” that reality becomes distorted in the process.  I don’t mind getting up at 2:30am to drive 3 hours to a trailhead to start a hike, but when you are greeted with one piece of bread and a cup of tea in 4 degrees Celsius weather, it had better be a worthwhile hike.

This particular hike was not worth it.  With so many beautiful landscapes and hiking opportunities in Peru, and South America in general, it amazes me that Rainbow Mountain has remained at the top of seemingly every tourist’s list of must-see spots.  After our pseudo breakfast we walked uphill in the snow (which was nice for this Australian) and mud with 300 other gringos to the summit which has three or four shades of browny red ore seeping through to the surface of the mountain.  The Valencia filter on Instagram must get abused when people gleefully hashtag: #rainbowmountainsobeautifulmustseelocation.  After 2 hours up and 2 hours down (with a bout of minor food poisoning for me thrown in) we ate a buffet lunch and drove back to Cusco.

Out of the 5-10% or so of the world that I have seen I can honestly say that this particular day rates as one of the least memorable.  Peru is such a beautiful country and it’s sad to think that some people come only to see Machu Picchu and Rainbow Mountain.  Luckily we only wasted 1 of our 26 days on this place.

Rachel’s take: it was too early, too cold, and very difficult.  This 4 hour hike was harder for me than the 4 day Inca trail, but not because of the steepness of the mountain.  It was harder because it was soooo cold since we were in the open valley all of the way up, vulnerable to the elements.  It is Peru’s autumn right now, so hiking this in summer would probably be better.  Also, it was not a sunny day, it was very windy and it snowed.  In May.  That is strange for the northern hemisphere.

The other thing that made it difficult was the altitude.  We were up nearly 5000m so it is almost twice as high as the Inca trail.  Finally, part of the trail was very slippery because of the mud and also the slushy snow.  I am not sure how people were doing it without hiking poles.  They probably thought we were sissies while we were all going up, but I caught more than one jealous glance at my poles as all of us tourists struggled to make it down without falling.  I saw a lot of muddy legs and butts that day.  Finally, the last thing that made this difficult: the tiny breakfast of only bread and tea meant that I absolutely needed my Snickers bar on this day.  All that being said, I’m glad we did it because #FOMO and also, I’m a sucker for those Instagram pics.  I told Callum weeks ago that we were not allowed to leave Peru without doing Rainbow Mountain.  It took a lot of convincing and at one point I gave in and said we didn’t have to do it, but he could tell I was disappointed, so we booked a tour.  None of the tour companies are great, just FYI.  It is still rather a new tourist destination and they haven’t really ironed out the issues as of yet.  Maybe in 10 years it will be better, or, as Callum thinks, it won’t last that long as a tourist thing because people will get smart and stop booking it.

We’ll let you decide based on our pictures: worth it or not worth it?  Please comment below. 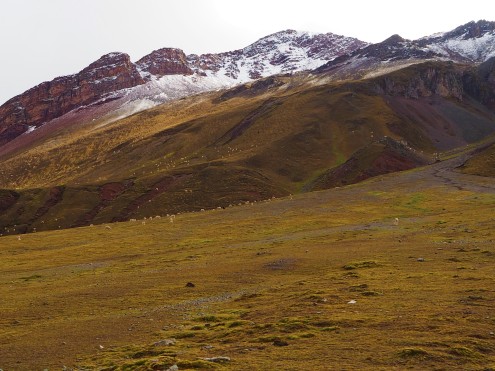 Beginning of our hike 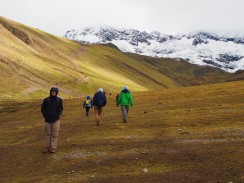 It was sooo cold 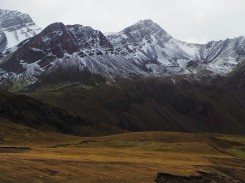 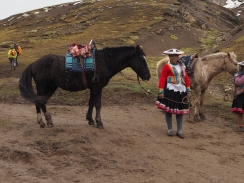 You can actually rent horses to go up and down. I opted not to as I wanted to get my blood moving by walking.

The last fifth of the way up, I caved and got a horse, but only because it was so muddy.

Look at this happy camper at the top 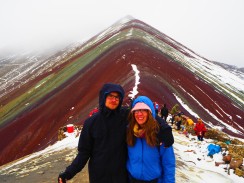 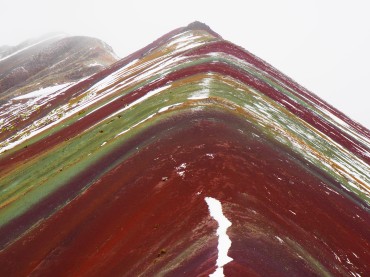 without all the tourists

this is what I look like when i’m freezing 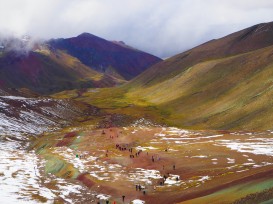 the opposite view going back down was actually prettier.

One thought on “A Mountain of Many Colours”